Cosimo Allera, was born in Gioia Tauro on 22nd of May in 1962. Son of a skilful artisan of the iron, he learn to use that material in the father's workroom, where he learn to familiarize with the metal. He takes the geometrician diploma and then he give himself to the improvement of the sculpture technique, showing a talent for the artistic iron works. At the beginnig he create just something good, but then he create the real art works, moore and more complicated and binding. In 1984, for the first time he getz in touch as an artist with the public.

From then, he always takes part in art exhibitions, showing he is creations in Italy and abroad. He receives formal recognitions from reviws and from articles published in the specialized magazines.

These are an important proof of his high quality work. During the years his work become more and more serious and he learn a lot of secrets and a high capacity in a subject apparently not so flexible to be modelled. Cosimo doesn't follow the trend and fashion, he doesn't run through a way that it's already searched. His art works shows his world, it's quite his world. The topic moves towards the future in a burst of generosity. The most common objects, like iron, bronze and copper, put almost together the reality with the imagination, so this in influences on the visitors a great power of grandeur. The Allera's secret, that is the secret of every real artist, is "to talk" with the public, it,s to give to the people new emotions and feelings, it's to enrich the cultural heritage, it's to help people to communicate amongst them.

The new iron age was born under these wishes. This metal, used by Allera with an unbridled brilliance, is the protagonist of his work, but also of today's tomorrow's and yesterday's world. The iron transforms and fortifies the structures of this dizzy epoch. The artist doesn't grant anything to the style, but he wants to aggravate a culture situation, giving a sensation of dramatic interpretation of our epoch through the density of the matter. In Cosimo Allera sculpture art stands out a nostalgic reality but vigorous at the same time, where the crying is stifled by the hope. There's, indeed, in the artist's soul a research and an appeal to go out from the daily life, condemned to the egoism.

He wants to take part in the social commitmnet were the strength of the humanitarian speeck predominates over the sculpture, where the cold iron is moulded by a considerable poetic harmony. This is the voice and the strength of Cosimo Allera, an iron sculpture, that lives in a little town Gioia Tauro, where culture means fear, but with his human and sincere art he achieved the world where the culture is the real master of uman life. 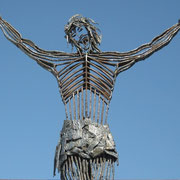 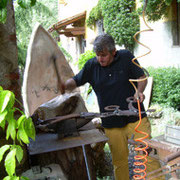 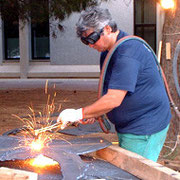 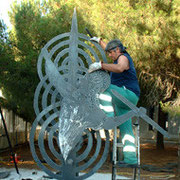 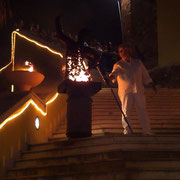 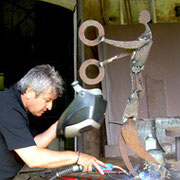 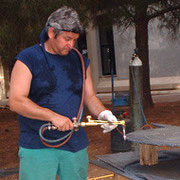 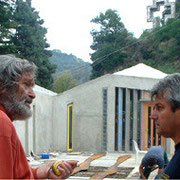 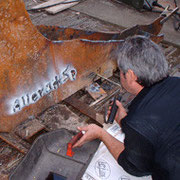