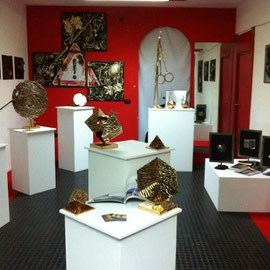 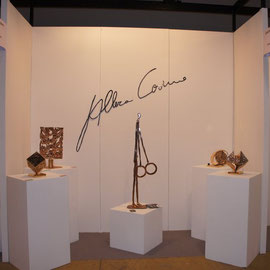 The elegance of form thin

Without critical forced, the research expressive of Cosimo Allera re-enters very well in plastic strand of research that has done great in the past century. He faces the problematic ones of the existence in a figurative search, where contained shape shouldn’t be separated. Manipulating sage of iron and the brass, creates human figures that to a dramatic sense and hermit of the life transmit.


The universe brought to the forefront of this sculptor is always in vertical key: his high shapes subtly cut express an incomparable elegance , like a Giacometti or Ceroli. It is an arcane world where every event takes place with all naturalness, despite of difficulty to reveal the mystery, through a form reworking process. The howl of warrior as the lightness of being are precious testimony that has characteristics, in my opinion, nocturnal and mysterious.

His artist’s maturity expresses himself through others significant, as the compositions of cut type, as the pain, two profiles of strong expressivity in bronze, or like the three execute for Angela, of bronze, iron and wood, where the extraordinary authority of the vision multiplying and exalts in the matter diversification and in thin variants that distinguish. Pizzingolo and Anelito suggest a literary quotation, or to review the myth, but certainly not in a cold game intellectualistic.

Under the apparent collapse of form, the meaning of these narratives are taking place, and should be read, the refinement of cuts and of assembly which give chromatic values to the areas and to the masse.
The sculpture by Cosimo Allera has its own ethics and stylistic coherence that could also be attributed to an informal style of research, well disagree so, from fleece of some contemporary art, which hides under the abstruseness the void of content.